This menu is for creating a Software RAID1 mirror. This means that all data are written to two identical disks. If one of the Disks fail the other one still contain all data. The minumum requirement are two drives of same size.

For optimal performance it is suggested to use identical harddrives.

This Software RAID module is based one GEOM Mirror.

Important - RAID does not equal backup. Even if you create a RAID array you must still keep another copy of your data in a different location.

This menu gives you and overview about existing RAID1 mirrors. The example below shows an already configured and running RAID1 out of 2x 2GB disk.

This menue is for selecting which drives do you want to use to create a RAID1.
In this example the RAID1 shown above will be created.

Select a name for your RAID array. This name will be shown on different places in the WebUI. ( example: Disks|Format )

Shows the type of RAID you are currently creating.

RAID1 provide different methods how data will be read from the drive. Select the algorithm which best fits your needs.

Every file is read from another disk. (simplified)

Read files from both disks simultaneously.

The requested file will be read from the disk with the lowest load.

This mean you can set a disk as preferred. All files will be read only from this disk, but written to both. This is used on setups with more read request while one disk is much faster or healthy then the other one.

For most setups “Round-Robin read” is a good choice. For advanced tuning see:

Check this box to create and initialize your RAID1.

After “Applying” on Disks | Software RAID | RAID1 | Management your RAID1 should be shown ans “COMPLETED”. After Formating and Mounting your RAID is ready to use. 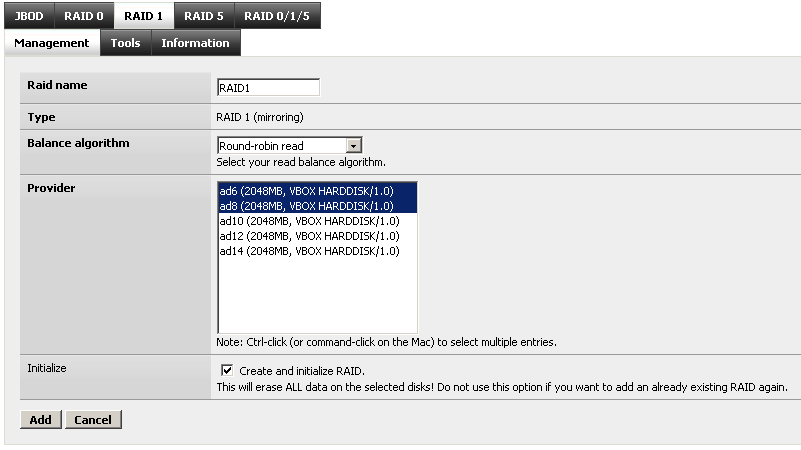